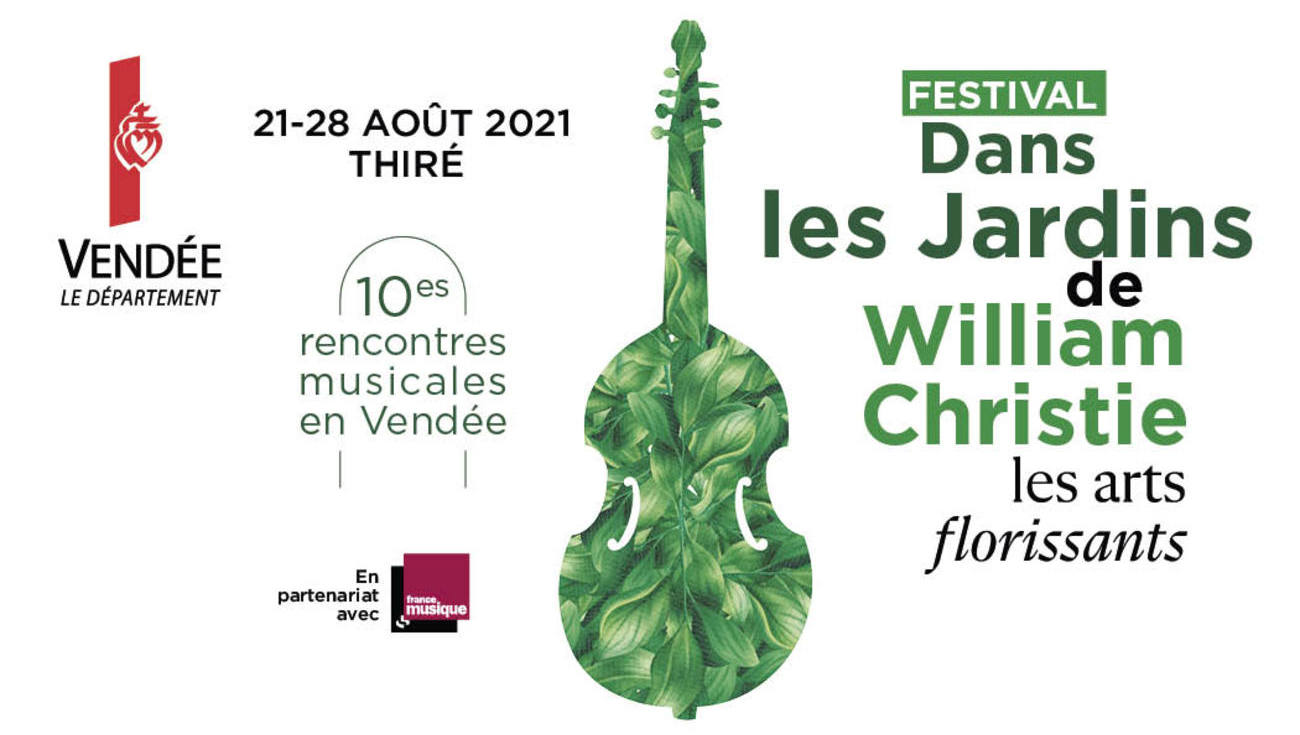 Born from a common desire of the Vendée Department and Les Arts Florissants, the Festival Dans les jardins de William Christie is a unique event in Europe. A subtle blend of baroque music and garden art, it highlights the richness of the Vendée's heritage and nature, particularly the site of Thiré, where the Les Arts Florissants - William Christie Foundation is based.

In 2021, the Festival celebrates 3 major events:

Come and take part in the party, by attending an edition placed under the sign of youth and (de)discovery!

In partnserchip with France Musique

This summer, it is at the Festival Dans les Jardins de William Christie that the public will be the first to hear the 10th edition of the Jardin des Voix. An anniversary edition, with a new program: Handel's opera Partenope, which Les Arts Florissants and William Christie are performing here for the very first time. The audience will be delighted to rediscover a masterpiece that is three centuries old... and to meet six exceptional voices, who are sure to be the talk of the town soon!

If Johann Sebastian Bach's name has survived the centuries, the same cannot be said of his contemporary Christoph Graupner. German like him, and like him a candidate for the post of Kantor in Leipzig, Graupner fell into oblivion before arousing renewed interest in the last century.
This program invites us to rediscover the "musical correspondences" between this little-known work and that of Bach, in a candlelit concert of sacred music. For the occasion, an exceptional singer will perform: the mezzo-soprano Lea Desandre, revealed by the Jardin des Voix, Les Arts Florissants academy whose 10th edition is being celebrated this year. This concert will also mark the return to the Festival of young instrumentalists from the Juilliard School in New York, who were unable to participate in 2020 - the reunion will be even more beautiful!

A monumental work, Monteverdi's Selva morale e spirituale is undoubtedly one of the summits in the history of Western vocal music. Composed at the very end of the composer's life, it marks the culmination of the sacred side of his work, whose depth, brilliance and modernity William Christie strives to show. From this immense "moral and spiritual forest" - of which Les Arts Florissants recorded some of the jewels at the end of the 1980s - a new anthology is proposed in this concert, made up of some of the major pieces of this collection, which includes more than forty.

For this last candlelight concert of the 2021 Festival, nothing less than a unique event was needed: a harpsichord duo bringing together William Christie, founder of Les Arts Florissants, and the young French harpsichordist of American origin Justin Taylor. The program will feature emblematic pieces from the Baroque repertoire, from England to France - by Tomkins, Farnaby, Purcell, Handel, Leroux and of course Couperin, William Christie's favorite composer who helped him rediscover his music.
A "symphony" placed under the sign of transmission, of musical friendship... and of this flagship instrument of Baroque music: the harpsichord!

After the success of L'Orfeo in 2018, Paul Agnew presents a new operatic production on the Water Mirror stage!
Impossible loves, fantasized exoticism... The Indian Queen, although left unfinished, unfolds all the creative fantasy of the English composer Henry Purcell. A connoisseur of this repertoire, Paul Agnew offers a recreation of this semi-opera between music and theater, for two exceptional performances at the close of the Festival. The audience will be able to meet five former laureates of the Jardin des Voix - the academy for young singers of Les Arts Florissants, which celebrates its 10th edition this year - alongside the actress Raphaëlle Saudinos and the choir and orchestra of Les Arts Florissants.

After the "Clos de Tomates" and the "Clos des Salades", the botanist gardener Baptiste Pierre proposes a new horticultural creation in the heart of the Quartier des Artistes. An educational garden with free entrance, to discover all the secrets of peppers thanks to explanations adapted to all ages.
Gardening workshops for children and families are also offered (free access without reservation)!

The family workshops invite you to discover baroque singing and dancing... through practice! Led by dancer Pierre-François Dollé and singer and director Sophie Daneman, these discovery sessions are suitable for all ages. With a novelty: this year, they will be offered at the Quartier des Artistes, to discover this international campus in the heart of the village of Thiré, with the artists of Les Arts Florissants.

11:30am – Dance workshop with Pierre-François Dollé: Tea or Coffee ? English Dances in the "French Mode"!

Pierre-François Dollé and Marie van Rhijn will make you dance to the music of Purcell's The Indian Queen. No need to be athletic to try this cheerful exercise, only conviviality and good mood are required, without forgetting the French-English friendship!

Sophie Daneman and the musicians of Les Arts Florissant invite you to celebrate nature in music, in a bucolic setting, by the water. A succession of moments of discovery, listening, participation, for the whole family, young and old alike!

"Musical promenades" are today emblematic of the Festival Dans les Jardins de William Christie. Each afternoon, these short open-air concerts invite to explore the multiple spaces in the garden, and to discover the baroque repertoire through pieces more or less known, selected by the interpreters themselves. These are often magical moments that offer a unique proximity between the public and the artists.
This year, the musical promenades will be offered in courses of four concerts each: choose your time... and let yourself be surprised!

"Meditations at the Dawn of the Night” concerts

The Meditations at the Dawn of the Night are back! After having to be offered in digital version in 2020, these short concerts of sacred music will once again come to close each festival day, following the great evening concerts. These are moments like no other to go into the night with music, in the meditative atmosphere of the Church of Thiré, by candlelight.

Partners of the Festival

For all Festival shows and events, we remind you that a health pass*, accompanied by an ID, will be required from July 21, 2021 for all spectators over 18 years old.
In the absence of valid proof, access to the event will be refused.

*Certificate of complete vaccination, PCR or antigenic test less than 48 hours old, certificate of recovery of COVID-19 dated at least 11 days and less than 6 months old. The health pass and spectator identity control does not record any personal data, in accordance with the French law.