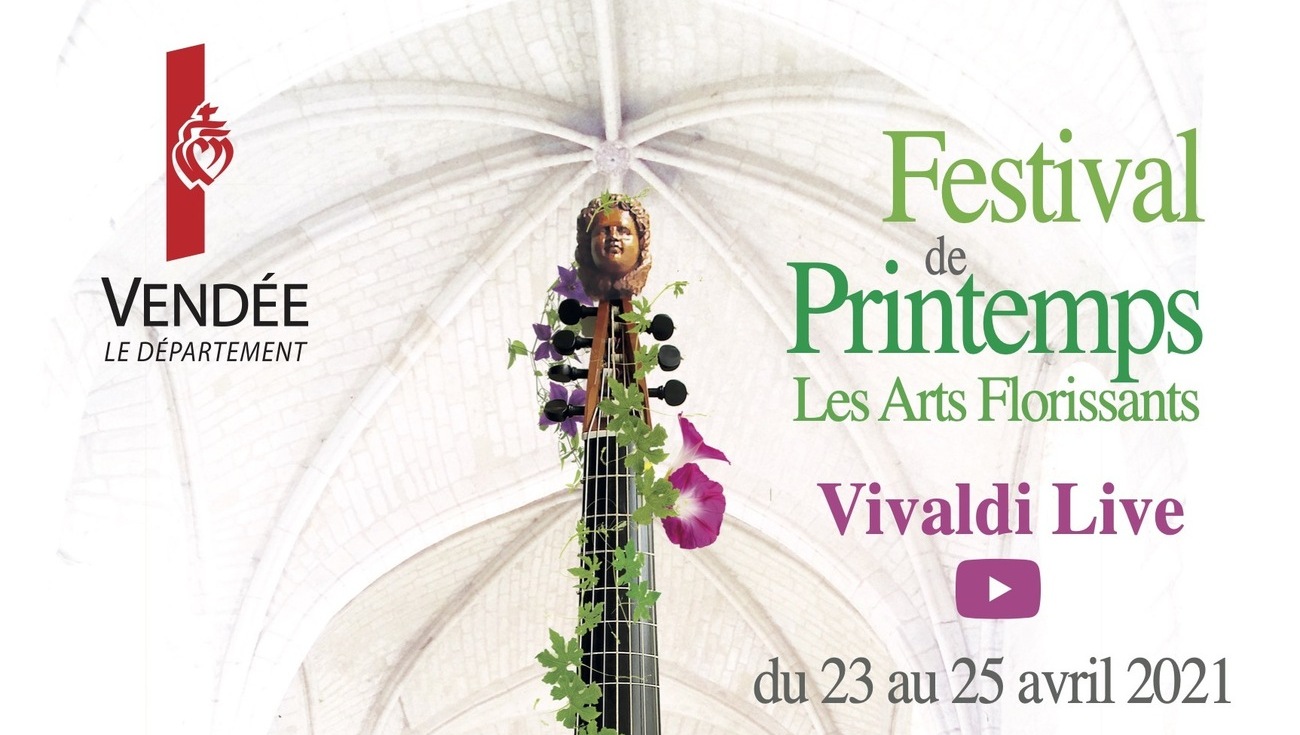 Combing the pleasure of music and the beauty of gardens, the Spring Festval is an invitation to discover the sacred choral repertory in the exceptional setting of the churches of the South of the Vendée region.

This year, the Festival will evoke Baroque Venice with a program dedicated to one of the most famous  composers of the time: flamboyant Antonio Vivaldi!

Due to the health situation, the 2021 edition of the Spring Festival will be offered in a 100% digital and free format, so as to be accessible to as many people as possible.

“Vivaldi’s solo-voice motets are at once deeply dramatic and intensely spiritual, like the priest and composer himself, and the circumstances in which they were created.” Paul Agnew

To open this fifth edition of the Festival de Printemps (Spring Festival), Paul Agnew invites us to rediscover one of the most radiant sacred works of the Baroque period: Vivaldi’s Stabat Mater. Carried by the unique timbre of la contralto française Lucile Richardot, this concert for orchestra and solo voice offsets Vivaldi’s luminous purity with the scholarly fervour of Johann Sebastian Bach, in the form of one of his cantatas. An evening that promises to be memorable indeed!

“If I have taken on this music, it is first and foremost because I love it and want to bring it to life.” Paul Agnew (2007)

Prepare yourself for a musical immersion in Vivaldi’s era, just as if you had been transported to Venice—or more precisely, to the Church of the Pietà, famous for its exceptional musical ensemble and where the “Red Priest” officiated for twenty years. The office of Vespers held great importance in that period: often thought of as something in-between liturgy and concert, it brought together worshippers and music lovers alike, drawn to the virtuoso music. Here, Paul Agnew returns to the programme of his very first concert as conductor of Les Arts Florissants in 2007. It is a chance to revisit the early days of his conducting career, while reinterpreting a repertoire that holds special significance for him.

In this new programme, William Christie juxtaposes works by two of the greatest masters of Italian Baroque music: Antonio Vivaldi and Giovanni Battista Pergolesi. On one side is Venice, with two motets and a concerto for strings by the composer also known as “the Red Priest”; and on the other side, Naples, with the famous and poignant Stabat Mater by the brilliant Pergolesi, who died at age 26. Here, the Arts Florissants instrumentalists can certainly unleash their virtuosity, alongside two young singers placed in the spotlight by William Christie, now counted among the promising talents of their generation: countertenor Théo Imart, winner of Le Jardin des Voix, and American mezzo-soprano Jessica Niles, a student at the Juilliard School in New York.

With these short coffee-hour concerts, the Arts Florissants musicians invite you to discover Vivaldi pieces they have specially selected. A convivial and musical break in the day, filmed in William Christie’s living room!