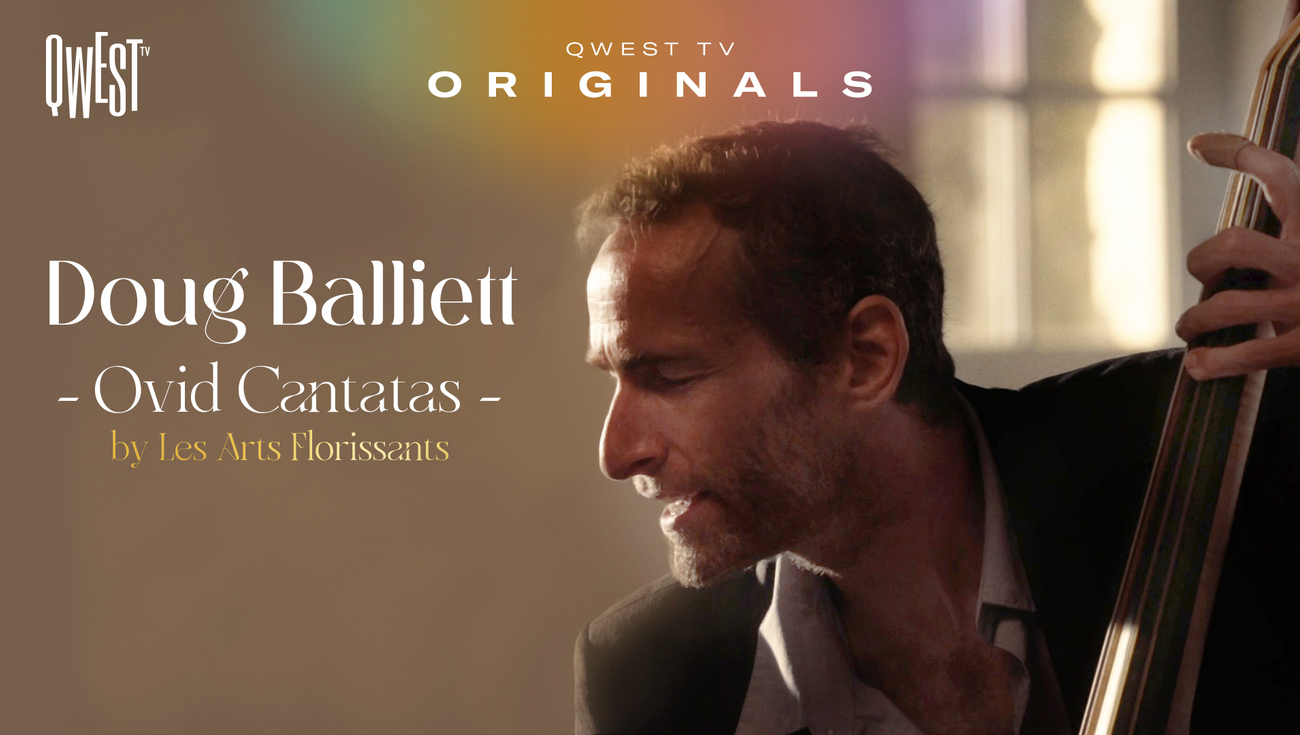 As regular visitors to the Festival Dans les Jardins de William Christie know, Douglas Balliett is not a musician like others.

Discovered by William Christie nearly ten years ago, while still a student at the Juilliard School in New York, this young double bassist quickly made a name for himself with his charisma and original compositions, which draw from the Baroque spirit the seeds of a resolutely contemporary creativity.It was therefore with great pleasure that Les Arts Florissants invited him to film a series of pieces originally composed for the very special setting of William Christie's Gardens: the Ovid Cantatas.

To perform them, Douglas Balliett has gathered around him a host of exceptional musicians: laureates of the Jardin des Voix Lea Desandre and Nicholas Scott, instrumentalists of the French baroque "young guard" (Thomas Dunford, Théotime Langlois de Swarte, Emmanuel Resche, Myriam Rignol...), young graduates of the Juilliard School... and William Christie himself!

"Ovid’s Metamorphoses is not just a great collection of stories (though it is also surely that). It is a Virgilian epic, told with great poetic force, with a pulsing rhythm and energy that regularly switches registers from speech to song. It narrates, it chants, and it sings. It is this aspect of the poem that I wanted to bring out in my own retelling of these famous myths.
The Metamorphoses were immensely popular during the baroque period, having been recently “rediscovered” during the Renaissance. These myths occupied a central place in early baroque drama, in opera and cantata, all over Europe. It’s for this reason that I chose to score these works for a baroque ensemble, anchored by a continuo group. The choice of cantata form is naturally suggested by the poetry itself, and adding a narration character allows much more scope for direct storytelling, wordplay, and the verbosity so loved by Ovid himself.
It’s impossible to imagine a better group of musicians to perform this project, which calls for highly trained baroque musicians who all share a love for the spirit of new music. This is certainly the case with the students from Juilliard, but we also have the honor of having star singers Lea Desandre and Nick Scott, and the immensely talented instrumentalists from Les Arts Florissants, including Thomas Dunford, Théotime Langlois de Swarte, Emmanuel Resche, Myriam Rignol, and more. As an unexpected dream come true, we are joined by the maestro who makes it all possible, William Christie." Doug Balliett

This unique blend of tradition and modernity, between baroque inspiration, jazzy improvisation and slammed poetry has enthralled the great American jazzman Quincy Jones, who has included this project in the programming of his audiovisual platform Qwest TV:

"When we founded Qwest TV, our goal was to create a community for all things jazz and beyond. From hip-hop to dance, to funk and electro, to R&B and of course, classical music: it makes my soul smile to welcome Doug Balliett, William Christie and his Arts Florissants ensemble on Qwest TV" Quincy Jones Founder of Qwest TV

Join us on January 10 at 4PM (Paris time) to discover this new musical and cinematographic creation: