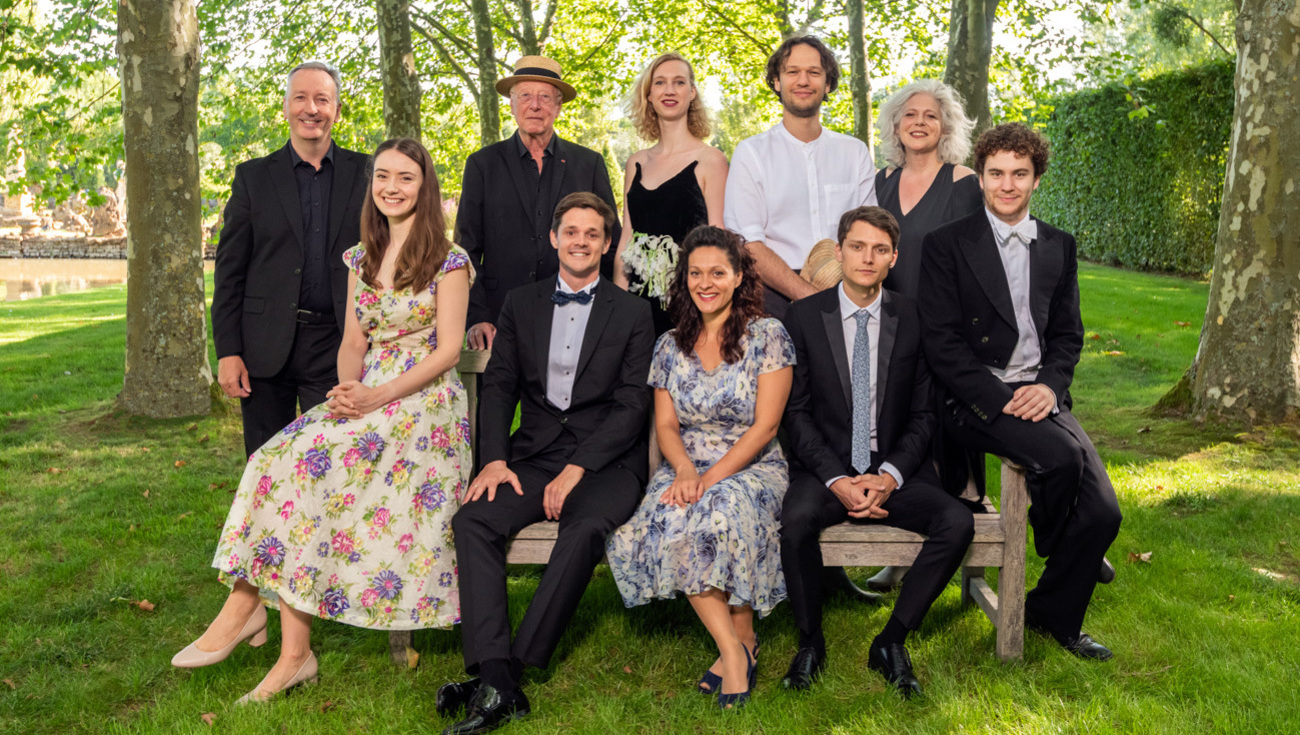 The Laureates of the Jardin des Voix 2019 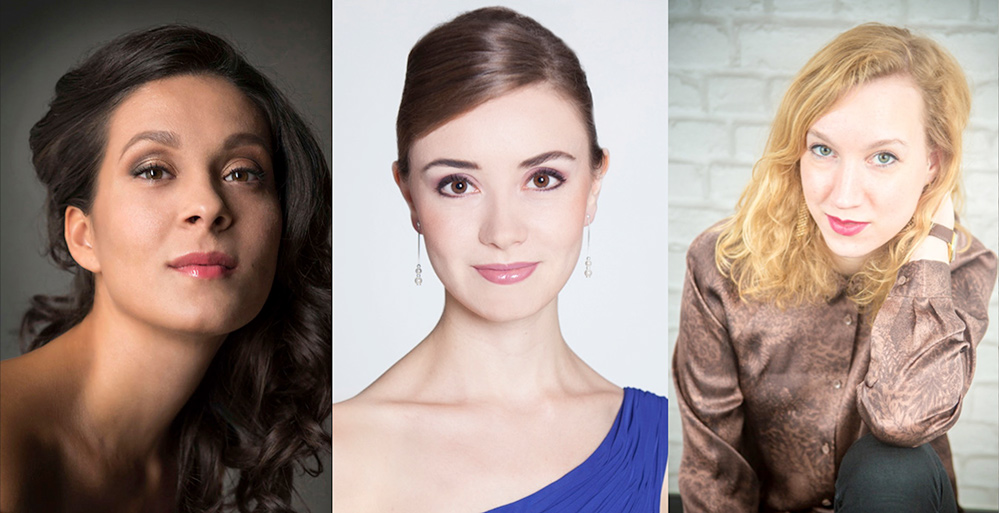 Young Italian soprano Mariasole Mainini holds a degree in clarinet from the G. Verdi Conservatory in Como and a singing degree from the G. Verdi Conservatory in Turin. She began her career at Teatro Regio Turin in the roles of Pamina in Die Zauberflöte for children and Berta in Il Barbiere di Siviglia for children. Past engagements include First Lady in Die Zauberflöte at Teatro Donizetti Bergamo, Teatro Sociale Como, Teatro Grande Brescia, Teatro Ponchielli Cremona, Teatro Fraschini Pavia, Amore in Il Ballo delle Ingrate by C. Monteverdi, Lilian Holiday in Happy End by K. Weill at the Conservatory of Turin, and Mass in G Major by Schubert at the MITO Festival in Turin. Future engagements include Barbarina in Le Nozze di Figaro at Teatro Regio Turin.

British/Australian soprano Lauren Lodge-Campbell studied at the Guildhall School in London with Janice Chapman and Yvonne Kenny, and at the Queensland Conservatorium in Australia with Margaret Schindler. She was recently awarded both the Carne Trust Second Prize and the Michael Normington Audience Prize at the Handel Singing Competition, and was a semi-finalist at the Wigmore Hall/Kohn Foundation International Song Competition. Recent and future opera roles include Princess in The Hogboon (London Symphony Orchestra, cond. Sir Simon Rattle); Gretel in Hansel and Gretel (Iford Arts); Tante Friedelena in Bach: The Great Passion (Dartington International Festival); Amore in Il ballo delle ingrate, and Venus in Venus and Adonis (Brighton Early Music Festival). Lauren will appear at the London Handel Festival and the Händel-Festspiele (Halle) in 2019.

Belgian soprano Deborah Cachet has won awards in several singing competitions, including 1st prize in the Froville International Baroque Singing Competition (2015), and 1st prize and the audience award in the New Tenuto competition (Brussels, 2013). She was a finalist at the International Singing Competition for Baroque Opera Pietro Antonio Cesti (Innsbruck, 2017). She regularly performs with ensembles such as Pygmalion, Correspondances, L'Achéron, le Poème Harmonique, Les Muffatti and Scherzi Musicali. Deborah studied at the Luca School of Arts (Louvain, Belgium) with Gerda Lombaerts and Dina Grossberger, and the at Conservatory of Amsterdam with Sasja Hunnego. She is currently a student of Rosemary Joshua.

In 2004, at the age of nine, Théo Imart began studying music and singing with Samuel Coquard at La Maîtrise des Bouches du Rhône. With La Maîtrise, he performed in various concerts, lyrical productions and recordings, including Britten’s Ceremony of Carols in 2011. In 2015, he was accepted to the Ecole Normale de Musique Alfred Cortot to study singing with Mireille Alcantara, with a focus on the lyrical repertoire, lieder and melody. He has attended a Master Class by Jennifer Larmore. In 2018, he received his Advanced Concert Artist Diploma (Diplôme Supérieur de Concertiste) by unanimous vote of the jury. In July 2018, he played the role of Idamante in Mozart’s Idomeneo at the “Opéra de Baugé” Festival.

Moritz Kallenberg began his musical career with the Capella Vocalis boys’ choir in Reutlingen. He embarked on his soloist career with soprano Ulrike Härter and joined the Jungen Oper (Stuttgart) in 2007. He studied with Reginaldo Pinheiro in Freiburg and then in Florence, Italy. Continuing to perfect his craft, he regularly attends master classes with Brigitte Fassbaender, Rene Jacobs, Margaret Honig and Claudio Desderi. Moritz was a prize-winner in the 2016 Bundeswettbewerb Gesang singing competition in Berlin and is a Helene Rosenberg Foundation scholarship recipient. Since the 2017/2018 season, he has been a member of the International Opera Studio in Stuttgart. He has performed with the Philharmonique de Paris, the Staatskapelle Berlin, the Orchestra of Milan Giuseppe Verdi and the Staatsorchester Stuttgart, under the baton of Sir Simon Rattle, Claus Peter Flor, Sylvan Cambreling, Frank Beermann and Ruben Jais. In 2017, he made his debut with the Staatsoperette Dresde and the Staatsoper Stuttgart.

British tenor Rory Carver made his debut at the Brighton Early Music Festival in 2017 in the title role of Monteverdi’s Orfeo. He studied at the Royal College of Music with Russell Smythe and Simon Lepper, and received the Douglas and Hilda Simmonds Award and Scholarship. Rory was a finalist at the Oxford Lieder Young Artist Platform, a finalist at RCM’s Joan Chissell Schumann Competition, and received a jury’s commendation in the London Song Festival and the RCM Lieder competitions. Future engagements include returning to the Oxford Lieder and Brighton Early Music Festivals, and touring in Handel’s Semele under the direction of John Eliot Gardiner.

Bass-baritone Sreten Manojlovi trained with Julijana Anastasijevi and Sebastian Vittucci in Vienna, and is now a student of Carol Blaickner-Mayo. As a participant in the Belgrade Baroque Academy, with Marijana Mijanovi and Predrag Gosta, he received a wealth of musical knowledge and developed an affinity for seventeenth- and eighteenth-century music. He is mentored by Christoph Ulrich Meier and Tomislav Facini. He received the Anny Felbermayer Award for a lied duo and is a SIAA Foundation Scholarship recipient. Future engagements include Polifemo in Handel’s Acis and Galatea and an early music ensemble project.