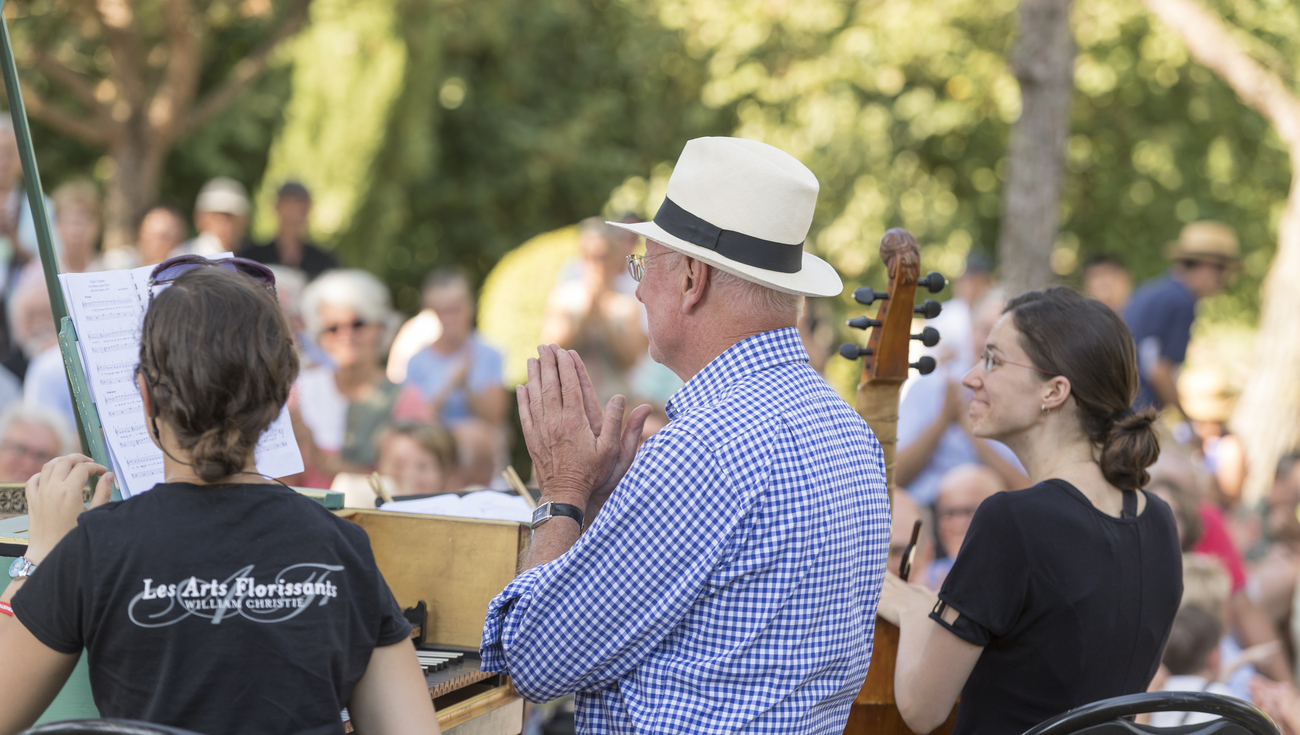 The baroque spirit, since1979

Bringing the baroque spirit back to life and making it rediscovered by as many people as possible, thanks to the emotion of music and the arts: this is the project that drives the Les Arts Florissants – William Christie Foundation. Based on 40 years of experience as a first-rate musical ensemble, and on an exceptional heritage site, Les Arts Florissants are today a recognized foundation of 'public utility and labeled "Cultural meeting center".

Founded in 1979 by William Christie, Les Arts Florissants is one of the bestknown baroque-music ensembles in the world. Established in the name of creativity, pleasure and sharing, the Ensemble has played a pioneering role In the revival of a repertoire that had been largely forgotten and which is now enjoyed across the globe in all the most prestigious concert houses. This pioneering spirit has never died, and Les Arts Florissants’ two artistic directors, William Christie and Paul Agnew, continue the Ensemble’s tradition of research and innovation today.

Over 100 concerts each season
More than 200 artists
1/3 of concerts abroad
A residency at the Philharmonie de Paris
2 annual festivals (in Vendée - Pays de la Loire, France)

Passionate about the transmission of all aspects of baroque art, over the years Les Arts Florissants have broadened their scope to include two of William Christie’s other passions: heritage and the art of gardens. This meaningful, transdisciplinary evolution of Les Arts Florissants led to the project being designated a ‘Centre Culturel de Rencontre’ in 2016, a label recognizing exceptional heritage sites being reinvigorated through a rich cultural program. Thus the adventure continues in the Vendée town of Thiré, with William Christie’s remarkable gardens and now an Artists’ Quarter (Le Quartier des Artistes) offering a year-round program of activities and events open to the public.

An international Centre for Arts & Culture

A residency at the Philharmonie de Paris

A collaboration with the Juilliard School in New York

"Almost 40 years ago a group of friends and I founded Les Arts Florissants, the ensemble that has allowed me to rediscover the magnificent repertoire of the baroque age and perform it in all of the world’s most prestigious halls. At the same time, in the Vendée, I have accomplished another of my dreams: creating a unique and original garden around my 17th-century manor house, which is now the setting each year for the , where we welcome music lovers from all over the world.
“Encouraged by these years of success, I now feel it is time to put Les Arts Florissants on a firm footing for the future. For this reason, the creation of a foundation, recognized by the French government as being of “public utility,” was fundamental. And to make it possible, I have decided to gift all my properties, including my house and gardens, to the Foundation Les Arts Florissants – William Christie.
“This project is the realization of the dream of a lifetime. A dream of music and gardens, but also of the handing on of savoir-faire and passion to future generations of artists and audiences. It is here that all my desires converge and that everything begins. This is the start of a great adventure!”