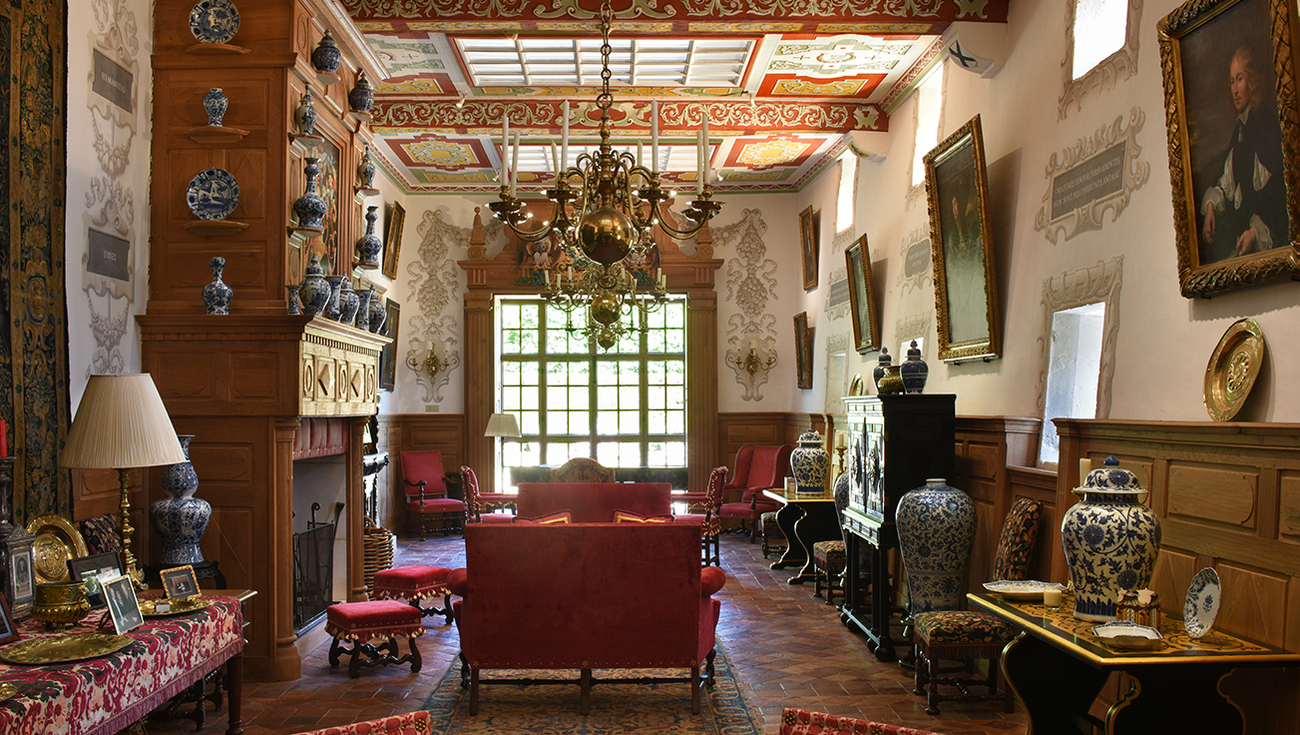 Rescued from ruin by William Christie, this historic home combines the fine and decorative arts to form a portrait of its owner 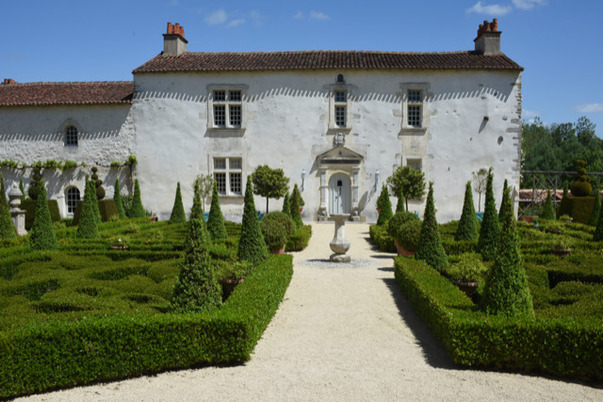 Music, festivals, an artists’ village, a garden, and also a house... At Thiré, in the French region of Vendée, “le Bâtiment,” as the home in question is prosaically known, has become a well-known local landmark. Gifted by William Christie to the Fondation Les Arts Florissants – William Christie in 2018, it plays a central, federating role in a project that combines music, gardens and heritage. Indeed the house is arguably at the heart of the enterprise, distilling as it does many of the themes in this unique artistic and intellectual adventure.

For the Bâtiment isn’t just any old house: rescued from ruin by William Christie, it’s both a historic home where visitors can discover the spirit of the seventeenth century, but also – and primarily – the house of an artist that reflects the unique personality of its owner. There is a deep affinity between Christie’s musical career and the mark he has left on the Bâtiment: just as he rescued from oblivion the long-dormant repertoire of the seventeenth century, so here he has lavished care and attention on a forgotten and undervalued heritage, that of the Vendée’s rural architecture. And while he has restored the Bâtiment with the greatest respect for its history, he has also allowed himself the freedom to place his own personal imprimatur upon it, exactly as he has brought his own interpretations to bear on the baroque scores he has so evocatively brought back to life.

Today the Bâtiment is a key player in the life of the foundation, a place of welcome to artists, students, academics and researchers from all over the world. Here they can find inspiration in an art de vivre infused with the spirit of the baroque, a sort of Gesamtkunstwerk to which Christie has dedicated his life, where music, architecture, painting and horticulture are combined to bring back all the atmosphere of an era. 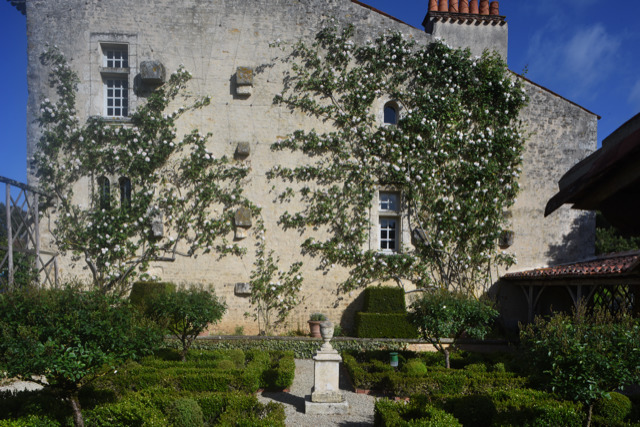 The rebirth of the Bâtiment

Built on the cusp of the seventeenth century, the Bâtiment is in many ways characteristic of French manorial houses of the time. At once noble and rustic, its charmingly sober architecture bears witness to the comfortable lifestyle adopted by the minor rural aristocracy, as can be seen in its thick stone walls, mullioned windows, handsome room proportions, impressive ceiling beams and, most of all, its many monumental fireplaces. While the house was evidently intended for well-to-do living, history seems to have had other ideas, for there are many telltale signs – unplastered chimney breasts, hearths where no fire was ever lit, rudimentary flooring – that suggest the building was never completed in its intended state. In an era ravaged by the terrible wars of religion, many families found themselves on the wrong side of the divide: following the siege of La Rochelle, in 1627–28, countless Protestants in the area were stripped of their titles and properties. No doubt the Bâtiment suffered the same fall from grace as its first owners. What is certain is that afterwards it came into the possession of a Catholic family, who turned it into a farmstead: over the next three centuries, tenant farmers came and went, until 1983 when the last one quit the holding.

When Christie discovered the house, in 1985, it had been completely abandoned. Of its many rooms, only two had been used for human habitation, all the others serving either as agricultural storage or for sheltering livestock. What is now the library was a hayloft, the drawing room a kennel for the farm’s dogs, and the red gallery served as a cowshed. But for Christie it was love at first sight. “When I visited the house for the very first time,” he recalls, “I realized it was exactly what I’d been looking for. I didn’t want a house in perfect shape, but rather a place that was rich in possibilities.”

After acquiring the Bâtiment, Christie set to work restoring the house. Taking the same approach as he would towards a baroque score, everything he did aimed to respect the language of the seventeenth century. As well as seeking expert advice and reading widely on the subject of the architecture and decorative arts of the period, he spent many hours simply observing his new treasure. For the Bâtiment’s long slumber had protected it from the meddling hands of modernization, leaving intact many period features that have disappeared from other houses in the region – the room proportions, the layout, the door and window frames, and of course the fireplaces and chimney breasts.

Once the fabric had been consolidated, Christie set about decorating the house – a process that lasted thirty years. For while he has achieved fame as a musician, Christie is also a passionate student of architecture and art history, interests that he first began exploring at Harvard. It was thus as a collector and connoisseur that he set about transforming the Bâtiment. Thanks to the painstaking work of skilled craftsmen, the beams and ceilings were adorned in vibrant colors, while the rooms slowly filled with furniture, pictures, books and objets d’art that Christie tracked down over the years – when, that is, he wasn’t working on transforming the grounds into a series of idyllic gardens. So it was that the Bâtiment began a whole new life.

An artist’s house – a guided tour

Though Christie knows and respects the codes, there’s nothing slavish about his approach – rather he plays with them and on occasion subverts them to bring his own personal touch to his home. A man of the theater, he has made of the Bâtiment a setting that is as eclectic as his many interests and passions, just as he has done in his gardens. It is this creative tension that gives the house its distinctive atmosphere, which is not without its share of surprises…

The drawing and dining rooms 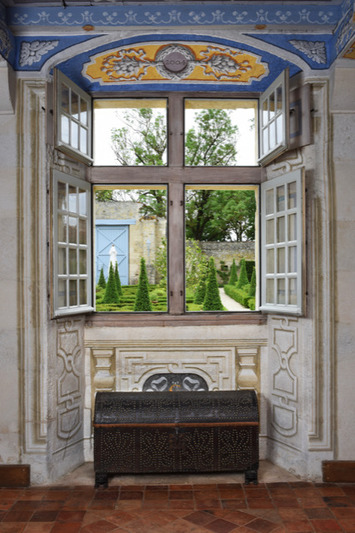 On entering, the visitor is struck by the monumental fireplaces that dominate these two rooms: very much in vogue in seventeenth-century France, they indicate a certain rustic comfort, with their generous proportions and ample forms. What kind of debonair lifestyle were these rooms intended for? The house’s new owner has suggested an answer in the polychrome painted décor that now adorns the ceilings and parts of the walls, an ensemble whose motifs and iconography were entirely dreamt up by Christie and the decorative painter François Roux on the basis of historic examples to be found in the region. In shimmering colors – blue and yellow for the drawing room, pink and green for the dining room – a charming, naïve picture of country life is evoked. But these images of culinary plenty, rural customs and floral splendor are also a way for Christie to portray himself – not so much literally as allegorically. For among these typically seventeenth-century motifs can be found the initials WLC – William Lincoln Christie – and spades, flutes and musical scores that allude to the life’s work of a gardener-musician. 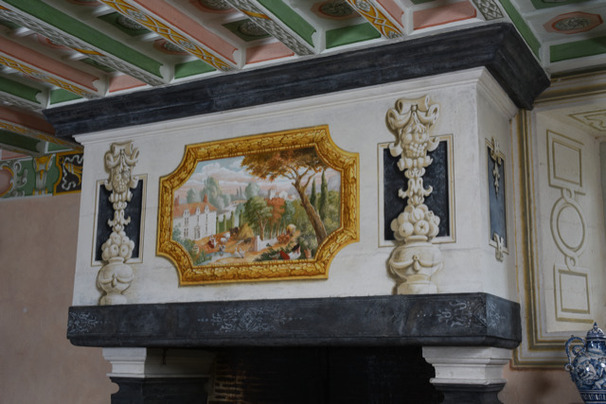 Now here’s a room that deviates from the seventeenth century, for these bookcases are so evidently of the belle époque. Made for the rare books department at the municipal library in Nantes, they were removed thirty years ago when the building was remodeled, at which point Christie decided to give them a second life here at the Bâtiment. Adjusted to the dimensions of their new home, they are complemented by the dark wainscoting running round the walls, while busts of philosophers perched at their summits bring all their gravity to this spectacular temple of learning. For both the library’s size and the central position it occupies in the house demonstrate Christie’s commitment to study and erudition. The countless volumes on the shelves include both new and historic works, some of which were acquired and others inherited, the Christie family collection having crossed the Atlantic to enrich the holdings. Leafing through the volumes gathered here, the visitor will discover Christie’s intimate and essential passions – music, gardens and the history of art and architecture.

The red gallery or music room 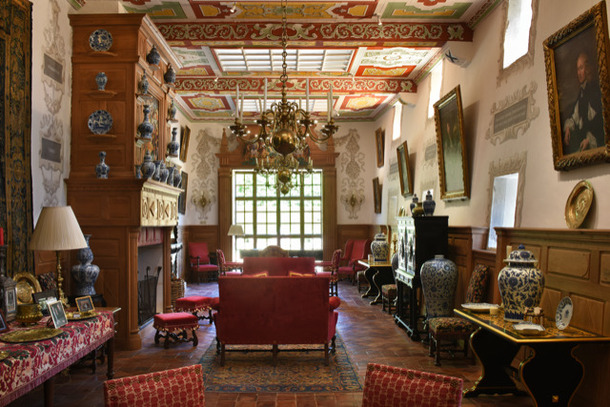 Red is the color that today dominates this wide, 20-meter-long gallery, which was once the stable. The crimson upholstery, the brass wall sconces and chandeliers, the antique tapestries and the oak woodwork of the imposing chimney breast all contribute to its atmosphere of warmth and cheer. Set off against the oak, on shelves above the fireplace, a collection of blue and white Delftware and Chinese porcelain recalls the seventeenth-century vogue for “chinoiseries,” as they were then called. No doubt equally exotic to French eyes of the time would have been some of the furniture that Christie has brought here from his parents’ house in Buffalo, such as the large American clock above the main window – pieces that both recall his origins and incorporate the New World into the Bâtiment’s eclectic mythological mix. In a similar vein, a series of trompe-l’oeil cartouches bearing Latin inscriptions has been painted onto the walls, each one a favorite maxim chosen by Christie from authors such as Virgil, Sallust and La Rochefoucault, whose seventeenth-century French has been translated into the language of the Romans for consistency’s sake. Pictures also play an important role in a room that is sometimes nicknamed the “portrait gallery,” with musical themes predominating in the canvasses acquired by Christie, such as portraits of the composer Etienne de Moulinié (1599–1669) and the high tenor Pierre de Jélyotte (1713–97). Indeed, of all the rooms in the house, the red gallery, thanks to both its size and its excellent acoustics, is the best suited to making music for an assembly of guests. Moreover, in summer, the large French windows at the far end open up, prolonging the gallery outdoors into a charming exedra that is filled with countless pots containing red flowering or foliaged plants. 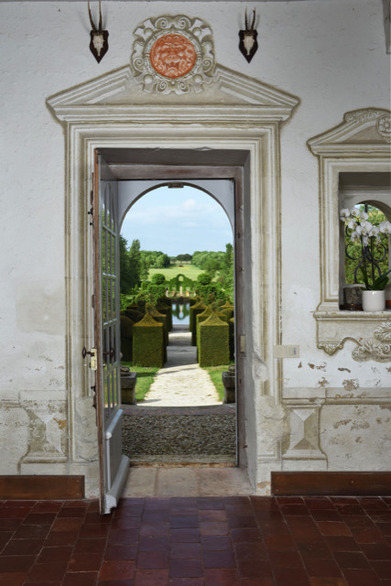 With their perspectives, colors and historic inspirations, the gardens form a backdrop to the rooms of the house, and make their mark on the interiors. This is particularly the case in the summer dining room, which sits directly on the line of the garden’s principal axis, and enjoys views out towards the reflecting pool and beyond it to the horizon. Opening onto the wide terrace that looks over the yew-tree parterres, it acts as a transitional space between the gardens, the kitchen, the drawing room and the red gallery – whose door is framed by two pipe-playing fauns, heralding the music to be heard within its walls. But there’s another door that also catches the eye – the one that leads to the cellar. Accessed by a steep stone stair, the entrance to the cellar is further dramatized by an astonishing painted trompe-l’oeil décor that is combined with hunting trophies. Is this, perhaps, an evocation of another reference dear to the seventeenth-century imagination, the antique mythology of Hades, nymphs and Bacchanals? On the thickly plastered walls, whose rough texture contrasts with the other rooms in the house, the horns and skulls of the animal trophies are set off in striking contrast. A sort of threshold to Arcadia, the summer dining room calls up the far-off echo of the ancient world, and one half expects to see, outside in the gardens, a faun with his pan pipes playing the sweet-yet-plangent melody of a pastoral. Is this not the magic of theater?