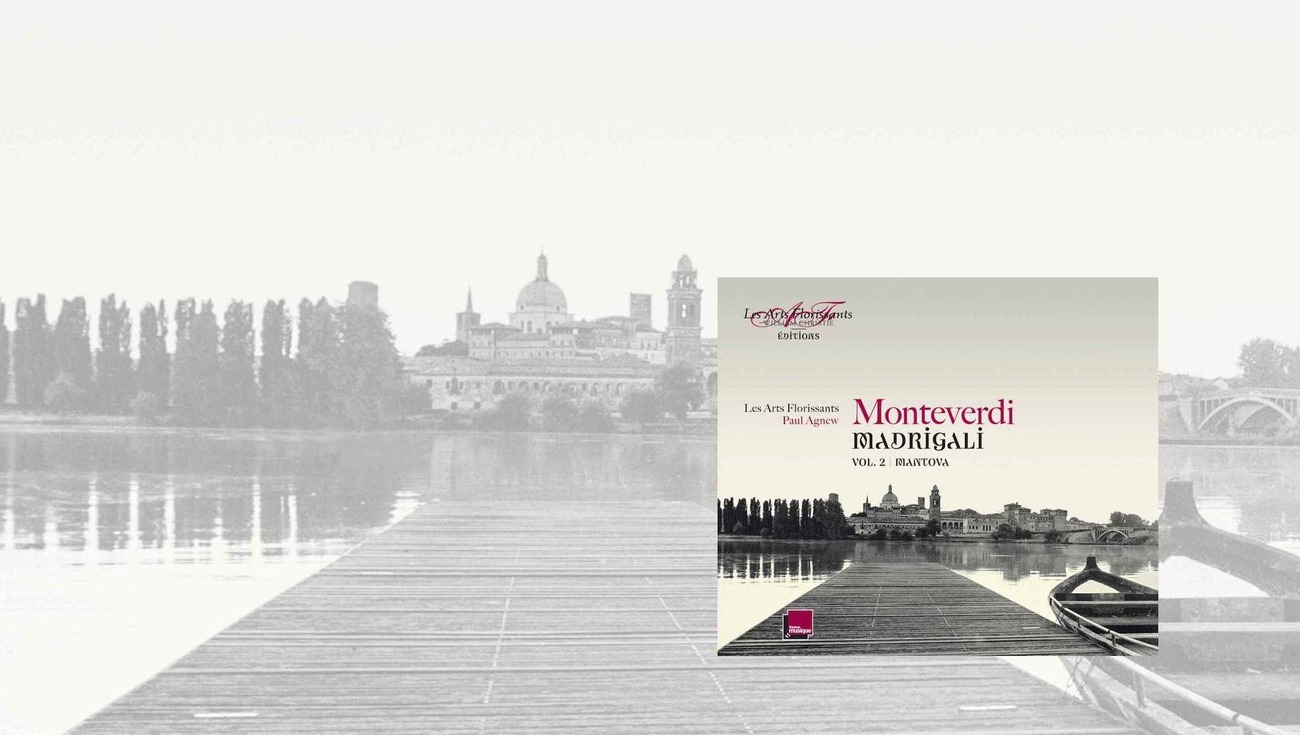 This disc is the second of three volumes offering an anthology of the eight Books of madrigals by Monteverdi, interpreted by Les Arts Florissants directed by Paul Agnew.

Three discs forming an anthology of Monteverdi’s madrigals are about to be released. Each volume will be associated to one of the cities that have marked out the composer’s career: the first opus dedicated to Mantova (extracts of Books IV, V, VI) will be followed by two others, dedicated to Cremone (in April 2015 – Books I, II, III) and Venice (in February 2016 – Books VII and VIII).

The idea behind the release of three recordings is to follow Monteverdi’s development from his youth in Cremona (Vol.1), though the establishment of his personal voice in Mantua (Vol.2), and finally to the flowering of the madrigal in his last years in Venice (Vol.3). The recordings themselves come from the Paris performances of our integral Monteverdi's madrigal series which started in 2011, during which we performed all the books of Monteverdi, in order, during a period of three years. They are taken from the concerts themselves ‘live’, given in the Cité de la musique, and equally from short patching sessions either before or after the concert. The aim was to give the listener the sense of the performance, and the text, through the music, being recounted to a public.

The choice of works to be included in this recording is an entirely personal one. I was guided by two ideas; firstly that it might be possible to follow Monteverdi’s musical voyage through the compositional medium he most loved, and secondly I was guided simply by the extraordinary beauty of the music. Because our concerts were spaced throughout the seasons of the ensemble, the personnel naturally changed, dependent on the availability of each singer for each period, and so, as the sound may change between one singer and another, I have attempted to maintain the same style and philosophy throughout the series.

Monteverdi’s corpus of work forms the foundations of the Baroque, and in performing these extraordinary works I have had to return to the fundamental notions of the music of this epoch.

It has been for me, and I hope for everyone involved, a rich education and more than that, a very joyous experience. I pay tribute to the talent, generosity and enthusiasm of everyone who has been involved in this long project, particularly radio France, the CLC, the Théâtre de Caen and the Cité de la musique.

To accompany the release of the CD Monteverdi Madrigali (vol. 2: Mantova), Paul Agnew recorded five bonus videos that bring a better understanding of Les Arts Florissants’ project to play and record all of Monteverdi’s madrigals.

The complete cycle of Monteverdi's madrigals, with Paul Agnew

Performance of The Eighth Book of madrigals in spring 2015